The Centre has been inaugurated 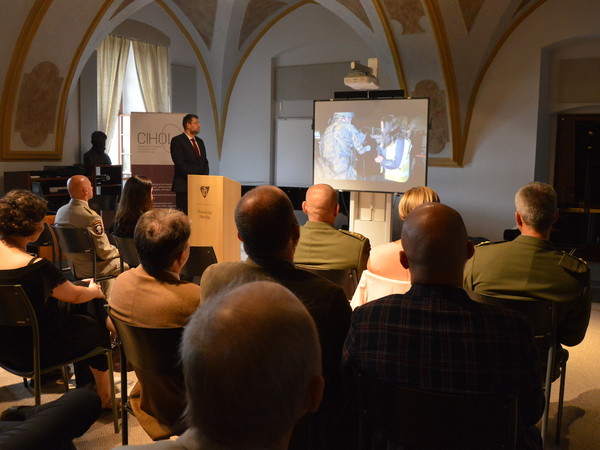 Faculty of Law and the Czech Armed Forces officially affirmed and strengthened their long-standing cooperation as the Centre for International Humanitarian and Operational Law (CIHOL) has been inaugurated. It will operate under the auspices of the Department of international and European law. Its specialization and interconnection of academia and military environment makes the Centre unique in the Central European context.

Ceremonial presentation and launch of its activities took place in the Chamber Hall of the Palacký University Arts Centre on June 20. The ceremony was attended by almost 50 guests, including the chief members of the Faculty of Law, chief members of the military, representatives of the Ministry of Foreign Affairs or partner non-governmental organisations. "Establishment of the Centre is an outcome of a long-term cooperation, so it already has something to build upon, and I believe that it has bright prospects for its future work. I wish to those who are involved in its operation that they further develop and enhance mutual cooperation and enjoy their work," said Zdenka Papoušková, The Dean of the Faculty of Law.

In particular, she expressed her gratitude to Vice-dean Martin Faix and lieutenant colonel Otakar Foltýn for their work as two founding members of the Centre. She also thanked to brigadier general Pavel Kolář, Director of the Special Forces Directorate of the Ministry of Defence & Armed Forces, and to Václav Stehlík, Head of the Department of International and European Law to which CIHOL will belong.

The significance of the Centre has been remarked by Pavel Kolář in his speech. "In the long run, I am convinced that the military has to stay in touch with society, especially in the area of education. Establishment of the Centre is a great example of how to mutually benefit from the knowledge of academics and practical experience of soldiers."